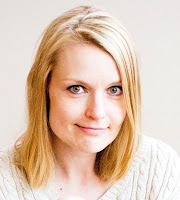 Melissa Fite Johnson’s first collection, While the Kettle's On (Little Balkans Press, 2015), won the Nelson Poetry Book Award and is a Kansas Notable Book. She is also the author of A Crooked Door Cut into the Sky, winner of the 2017 Vella Chapbook Award (Paper Nautilus Press, 2018). Her poems have appeared or are forthcoming in Pleiades, Valparaiso Poetry Review, Sidereal, Stirring, and elsewhere. Melissa teaches high school English in Lawrence, KS, where she and her husband live with their three dogs.

I can't put a date on exactly when Melissa and I met, but we both lived in Pittsburg, Kansas for a while and had a lot of the same "poetry people" in common. In June 2017, Melissa came to Downtown Poetry, a monthly poetry event in Joplin, MO, that I co-organize, and read poems from While the Kettle's On. On stage, she had no problem connecting with the audience always making them laugh or sit up straight in their chairs for the poem that followed. Her poems are honest confessions of  moments in her life that she shares as though having a conversation with you, yet they are also universal at the same time. I envy that in these poems.

This interview was conducted via email.


How do you define a poem?

I ask my high school Creative Writing students this all the time, often on the first day, and I’m still not sure I have a definitive answer. Ultimately, I think a poem is something that feels like a lifeline for both poet and reader.

How do you begin a poem (extra credit if you can think of a metaphor)?

Over coffee and breakfast, I read maybe a third of a poetry book, so I’m reading a new book every few days. I don’t put any rules on it; I just read to enjoy. I do find that this act works as a kind of primer, though. Those poems linger in my mind for hours, and that makes me more likely to sit down and write something that day. Because that’s the real answer: I decide to write, make the time.

Who are some of your favorite poets you find yourself returning back to?

My favorite poet is Sharon Olds. The summer I was twenty was a hard time for me. What got me through was checking out her books from the library and reading them in a downtown coffee shop. I read, stared out the window, wrote my own first hesitant poems.It’s hard to know where to stop when I start making lists of favorites: Lucille Clifton, Fatimah Asghar, David Lee, Linda Pastan, Rita Dove, Beth Ann Fennelly, Li-Young Lee. Honestly, a lot of my favorite poets are the ones I know personally—my brunch group of KC-area women, and my old workshop group of fourteen years. I’ve learned so much from them and their work, and I’m fortunate to have such support systems.

Who are you reading right now?

I am nearly finished with my friend Ruth Williams’ Flatlands (Black Lawrence Press, 2018). It’s gorgeous, so much so that I put off finishing it this morning because I wanted to savor it a little longer.

What are 2-3 poems from While the Kettle’s On that you hold above the others? What led you to write them?

Here’s something hard and honest: Some of the poems in that book are among the first I ever wrote. There’s so much I would change now. At the same time, these poems are also the purest I’ve ever written—by that I mean I wasn’t thinking about publication when I wrote them, and I never dreamed they’d ever be in a book. I wrote them before I knew to be self-conscious, and the girl who wrote them was proud of her work. Even though I’m a better writer than I was then, I don’t always know how to be proud now. The 2-3 poems I hold above the others: “The Dead,” “Vulnerability,” and “Good Housekeeping.”

Would you please read 2 or 3 of your favorite poems from your book:

Your family is a big theme throughout While the Kettle’s On, What was a poem in the book that was difficult to write in theme, subject matter or lines and why?

I remember “Fear Of” being hard to write—it was an assignment for class, a fear poem, and I wrote it as a catalogue as a way to blurt the thing that scares me the most without having to linger in it: “Worrying fifteen years / after my father’s death that maybe he died because / I didn’t call the ambulance in time.”

Your poem “The Dead” was a poem I messaged you about after reading your book. It stuck with me. I love the ending line: “because isn’t that nicer than sitting alone.” You have some great lasting images and lines in the book. Do you plan your poems before you write them, or do you kind of stumble along and wait to see what comes?

What are you working on right now?

I’ve been tinkering with my second manuscript for over two years. Sixteen of the poems in this collection are from my chapbook A Crooked Door Cut into the Sky, winner of the 2017 Vella Chapbook Award (Paper Nautilus Press, 2018).

1What advice do you have for aspiring poets?

When I first began writing, I had no publication goals at all; I didn’t send work out for a decade. I was writing to save myself. And when I read poets I admired, I didn’t feel envious or even competitive; I just read eagerly and learned. In some ways, I think we best know how to be poets when we’re just starting out.

You can read a few of Melissa’s Poems listed below, or you can visit her website at:
https://melissafitejohnson.com/

“The Woman and the Wolf” at Rattle

Julie Ramon is an English instructor at NEO A&M in Miami, Oklahoma. She graduated with an M.F.A from Spalding University in Louisville, Kentucky. Among writing, her interests include baking, sewing, traveling, and garage sales. She is also a co-organizer of a poetry series, Downtown Poetry. She lives in Joplin, Missouri with her husband, sons, and daughter.

Thank-you for sharing your thoughts with us!